Back to the Future and Trump Time Travel

I just watched a video on clues from Back to the Future about 9/11. By the next morning, I've come up with all of this below. This is a theroy in progress and I'm just discovering things and making adjustments. Please share your ideas if somethings off.

Here are more Back to the Future connections.

First a little background on Tesla and real past events. Nikola Tesla said he learned all his information from connecting with a global knowledge energy source everyone has access to using their pineal gland. Nikola learned how to do things free energy and levitation (hoverboards). The cabal doesn't want us accessing the knowledge source for the truth or get a hold of free energy. One way they keep us from learning is adding fluoride in the water which is said to calcify the Pineal Gland, blocking your ability to use your third eye. Through his inventions, the government, who is also controlled by the cabal, had Nikola Tesla make a death ray which was also like time travel and teleportation. Tesla's death ray was used in the Philadelphia Experiment on October 28, 1943 that teleported a navy ship and ended badly. The real Philadelphia Experiment story first appeared in news in 1955, from letters of unknown origin sent to UFO writer Morris Jessup. Morris Jessup released a book in 1955 called The Case for the UFO.

In back to the future, the DeLorean is mistaken for a UFO.

There is a real book out there released in 1889, titled "Baron Trump's Marvelous Underground Journey", lead by "the master of all masters, Don". This was released only 4 years after Doc goes to 1885. Barron Trump is Donald Trumps real child's name and he is a genius that has a high IQ. In the book, Baron and Don went through a Space time portal to the future and the book talks about about corrupt politics, a bunch of current events, it gave the exact location of trump tower, etc. This is a real book. Baron Trump is Marty McFly and the master Don (Donald Trump) is Doc Brown. 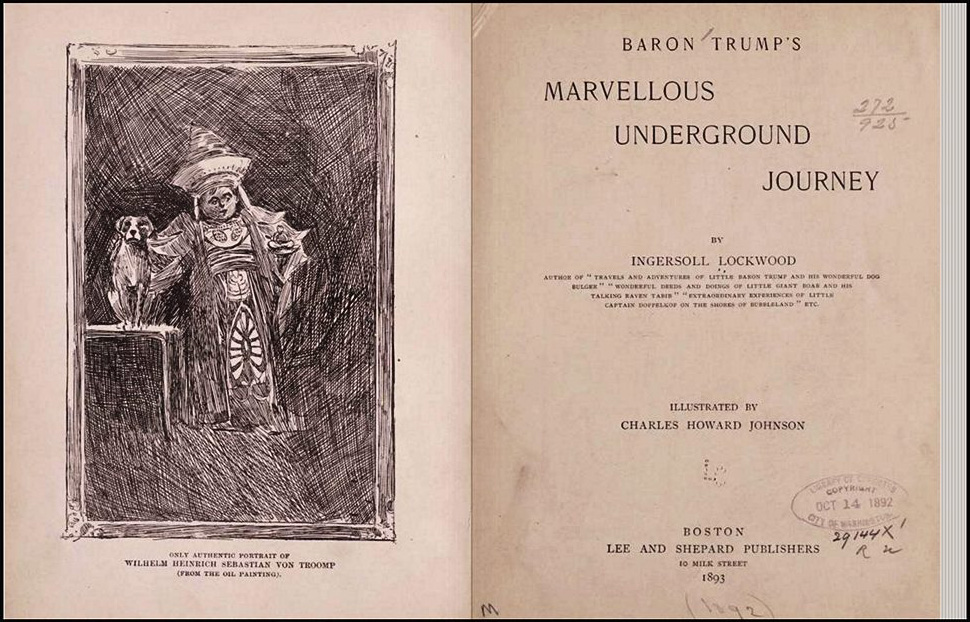 Hitler was making UFOs in Germany with the Nazis because Hitler often rated pyramids and tombs to learn ancient technology. United States's death ray was more powerful than what Germany had and ended the war. The United States took all nazi UFO information that Hitler stole from rated tombs and pyramids. The wars that we think are about oil are often also about ancient artifacts in the Middle East. Hitler often rated tombs and pyramids finding ancient technology. That's why they were looting everything taking all the treasure. America took all of Nazi scientist (operation paperclip) and started their own UFO program in the US creating NASA as the public facing distraction and the secrete program Military Industrial Complex (funded from nasa) to make the UFO stuff) After they used the death rate to threaten Germany, they were trying to see what else they could do with the death ray, which resulted in the Philadelphia experiment in 1943. Tesla could see into the future what the Philadelphia experiment was going to result in (all the bodys embeded into the ships metal) and refuse to be involved in the project anymore so he left the government and the government used the machine themselves and it caused a disaster with the Philadelphia experiment.

Donald Trumps uncle John G. Trump is also a scientist at the same time Tesla was around. When Nikola Tesla died, the FBI asked John Trump to analyze Teslas documents. John Trump immediately went and got his belongings but didnt return all the box. Since John Trump knew what he was looking at, he kept some of the boxes trying to prevent the government from getting certain tech. JFK tried to stop the cabal and got killed in 1963. 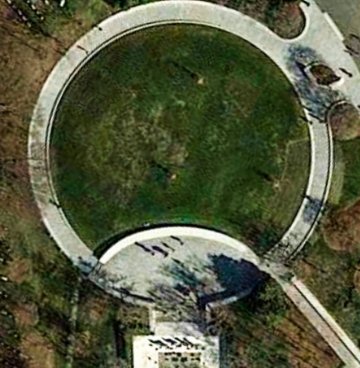 JFK's memorial is in the shape of a Q. JFK Jr is god friends with Donald Trump. Trumps Uncle learns time travel from Tesla's documents and teaches Donald Trump or gives him the ability to time travel. Similar to Doc Brown and Marty, or Rick and Morty, I think John Trump and Donalds son time traveled together, though Barons book says he traveled with the Master done. I think he likely time traveled with both John Trump and Donald. Later, I think Donald Trump time travels with his son Baron to learn the future information and now knows how to win the election and knows details about the child trafficking. After he won, he started indictments on all the child traffickers. Trump announced presidency in 2015. Q-Anon constantly posted future events before they happened and Q-Anon posted an image from Air Force One once. So Donald Trump could be Q.

Back to the Future showed 9/11 clues and then pointed to the clues in 2015 with the release of "The Walk" being on the twin towers. This just confirmed that Back to the Future knew about the towers and since they predicted that, we need to listen to their other clues. In Back to the Future, it kept saying you'll find out in 2015 (regarding the letter marty wrote). They wanted us to pay attention in 2015. So in 2015, Trump announced his presidency and also in 2015, the military publically announced that they successfully tested a new high energy laser. The Death Ray blueprints from Tesla's documents has been installed on a DARPA plane in 2015, Called HELLADS. In 2015, General Atomics, with funding from DARPA, produced a prototype 'High Energy Liquid Laser Area Defense system' (HELLADS). The High Energy Liquid Laser Defense System (HELLADS) is an all-electric 150kW laser. HELLADS holds the world record for the highest laser output power of any electrically-powered laser. It's often referred to as the Death Ray.

There is an alien race from Proxima Centauri, Centaurians, an underwater alien race with gills but can breathe outside, 5x stronger than us, 8.5' tall, with the most advanced tech. The cabal or government traded alien tech with these aliens in exchange for a safe haven where they could live. These aliens lived in a city called Paradise California. The cabal did a Satanic Ritual and killed 13 people in the Thousand Oaks club Borderline murders in Nov 7, 2018. The borderline murders were a satanic ritual and there are tones of symbolism everywhere with the Borderline murders. It happened on Nov 7, or 11/7, Revelations Chapter 11 vs 7, "Now when they have finished their testimony, the beast that comes up from the Abyss will attack them, and overpower and kill them". On google maps, you can see a bear and a shark outlined in the streets on Moorpark Rd and Thousand Oaks BLVD. There is a 76 gas station there and there is stuff in Revelations 76 too. Right where the bear and the shark meet at their mouths, is Borderline. On Nov 8, or revelations 11 8, it says "And their dead bodies shall lie in the street of the great city,". On Nov 8th, the City of Paraside was burned down with the HELLADS death ray laser which was announced and demonstrated in 2015. The filming location for Twin Pines Ranch (the ranch, not the Twin Pines mall) was at Golden Oak Ranch. Marty said his Lion Estates house was a mile away. The twin pines ranch was sold and turned into the twin pines mall, which looks like The Oaks mall in Thousand Oaks (but its not). Borderline Bar and Grille in Thousand Oaks is 1 mile from The Oaks Mall. 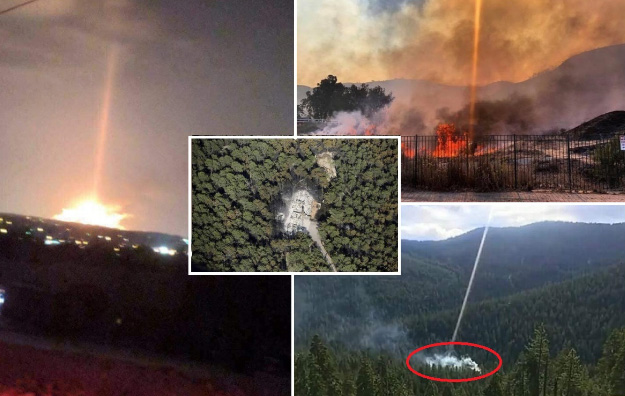 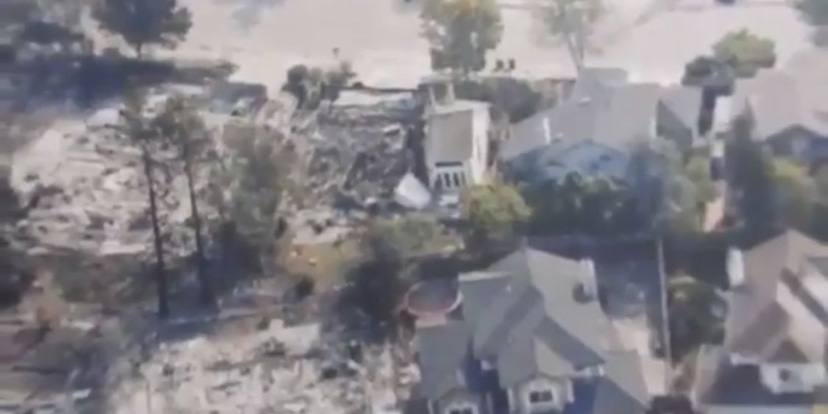 It was rumored that the Aliens in Paradise were planning on a disclosure event where they give people free energy, and reveal themselves. I'm not sure if the Cabal killed the aliens in Paradise for wanting to give out free energy or if Trump used the death ray to burn down Paradise California to prevent them from continuing that safe haven, because another clue In back to the future, when Marty crashes through Peabodys Twin Pine Ranch, he kid is holding a magazine called Tales from Space featured "Shocking Science-Fiction Stories", featured a story called Space Zombies from Pluto which was apparently about hostile aliens coming to Earth from Pluto.

When the newspaper changed in Back To The Future 2 from Marty McFly Jr was arrested for theft on October 22, 2015, it changed to Biffs' gang getting arrested on the steps of a court house because their hoverboard caused damage when it crashed into the court house windows. Interesting how the courthouse scene reminded me of the capital building riots. And the city streets back in the new 1985 timeline that was corrupted by Biff going back. That scene looks like how that city of Chaz protest thing happened in Seatle Washington. The court house scene of Biff getting arrested looked like the captiol riots too. 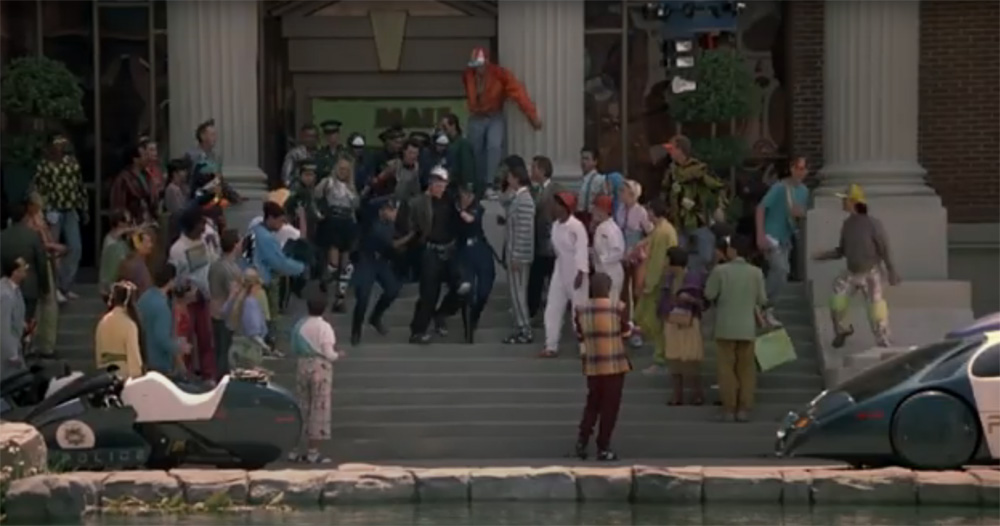 The DeLorean looks like a mix between the Tesla Model X (released 2015) with the gullwing doors and the Cyber Truck (Nov 21, 2019), which is made by Elon Musk, a billionaire (maybe he got his riches from a time machine???) In 1952 a German scientist also predicted the name "Elon" would be associated with the colonization of Mars. Maybe this german nazi scientist used the same tech as the project Looking glass tesla made to see Elon in the future on Mars. Q refers to Project Looking Glass which is a device the U.S. military has secretly developed a form of time-travel technology. 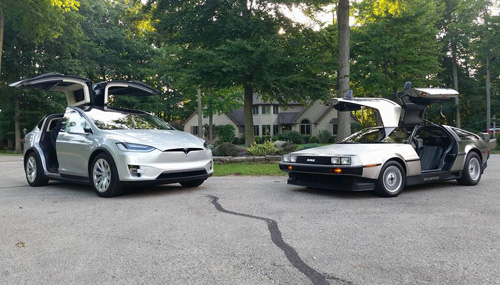 And the TV show Rick and Morty is supposed to copy back to the future with Doc and Marty. In Rick and Morty their grandfather and grandson. Donald Trump???s child Barron is known to be a genius. I think John Trump taught Baron time travel and then Baron later time travels with his dad Don.

John Trump died in 1985!! Donald Trump has said he shares his famed uncle's scientific genius. Doc Brown sets up electrical wiring at the courthouse as part of a "weather experiment". The death ray the cabal used to sacrifice the aliens in paradise, the death ray is also used as a weather experiment, to change the weather.